I finished my Overlay Mandala at the beginning of the week! I am definitely pleased with how the colours have worked together.

On the same night that I finished the mandala, I picked up my hook again and started the Little Miss Stripe set.

The scarf is finished and is currently being blocked, and I have two rows of double crochet to finish the hat. I am pleased to say that is a part one little person's Christmas present done.

I am very tempted to make a grown up version of this pattern for myself, using some wool that changes colour...a bit like Noro but something less expensive. Any suggestions?

I have added two new things to my wip list this week, a granny stripe scarf and hat. I am making these as a christmas present for someone little! I have called them the Little Miss Stripe set.

My Berry Burst shawl is still on the wip list, however she is having a little snooze since I have been busy with other things. She is getting quite big, and I am unsure how many more rows I want to crochet now.

I have other news to share with you! Firstly I passed my driver theory test on Saturday, some of you will know if you follow me on twitter, instagram or facebook. Secondly I got offered a permanent contract at my work yesterday, as I have been working under a temporary contract for the past 11 months! August has been a very good month for me!

I have been waiting to write this post for a little while now, but I chose not to show it until after I gave it to my sister.

I completed the Sunny Stripe blanket on 11th July 2012. 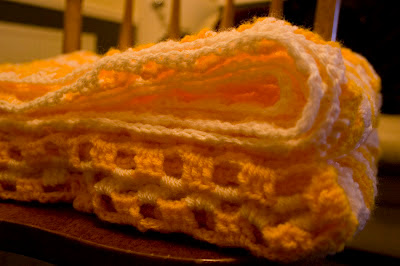 I started crocheting it in January/February this year as I thought it would take me until August to finish it, in time for my sister's 30th birthday. 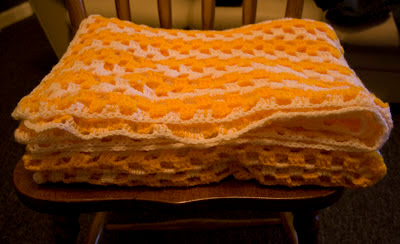 I was quite pleased that I managed to crochet the blanket within 6 months. 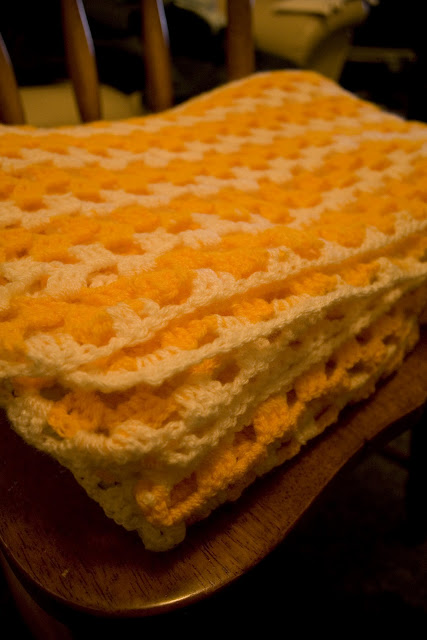 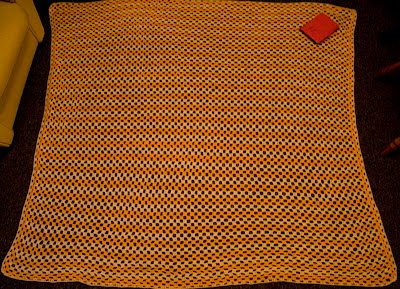 Just to show you the size of her I took a photograph with my kindle sitting up on the top right hand corner. I think it is the biggest thing I have ever crocheted and I am super duper proud of it!!

Hello there! Hope you are all keeping well and had a good weekend. I've been spending most of my time crocheting this little piece, the Overlay Mandala as a part of CAL. The CAL is being hosted by wink from a creative being, and she has also featured the progress of all the mandalas that are being made by everyone in post too. There are some people who have completed more than one mandala already and I am just doing round 21 of the pattern of my first mandala, only 5 more rounds to go! 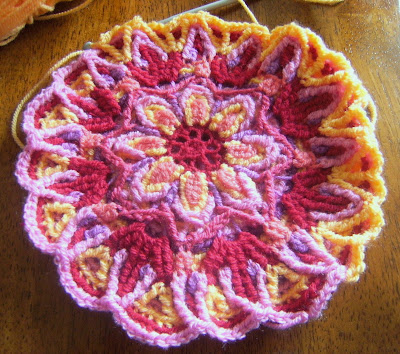 I am definitely doing a second one as I think it will be much neater, plus I want to use different colours too!! On another note I have recently bought Book Thief by Mark Zusak after hearing a few mentions of it. I did have a sample which previously put me off buying the book, as I wasn't sure about the narrating style. After reading it for a little while, it grew on me and I am now a few chapters in!

This kindle has opened up my eyes to the variety of different books there are out there, as I love how spontaneously you can buy something with it...I must buy at least 3 books a month on it. Don't get me wrong, I still love curling up with a proper book every now and then. I wonder if other book lovers are the same.

In my last post I mentioned that I am going to take part in a CAL (my first one)  that is being hosted by wink at a creative being.

I am doing my mandala slightly different from what the pattern states, as I am using Special Stylecraft DK wool with a 5mm hook. I thought it would be no harm in it being bigger, and it meant I had a variety of colours to choose from! However my initial journey with this pattern was a bumpy one, as you can see from the photos that I had several attempts before being successful in getting past round 5 of the pattern. I tried crocheting with 4ply wool, but it was too thin for me to see what I was doing. Then I attempted it with chunky wool to allow me to practice the stitches and so I could 'see' what I was doing.

Friday came along and I sat being frustrated with the pattern, thinking I couldn't do it and that it wasn't fair since some lovely people already had great results with their pattern (talk about being sulky).

I wasn't about to be defeated, as I realised my problem with the pattern is that I found it difficult to find that first front loop that I needed to start. Using paper-clips I marked the first front loop of round 2, 3 and 4 as I wanted to be sure of where to start instead of guessing 'oh that must be where I've to go...maybe'. Since doing this I haven't looked back at rounds 1-5 and I am now up to round 14!! I think once I have competed this, I will start another one with different colours. I plan to use this one as a cushion cover.

That is my adventures with the Overlay Mandala so far! There are other people joining in too, check out their stuff on the The mandala CAL pool page...lots of lovely work!

Posted by Hazels Crochet at 12:14 No comments:

Last week I spent the whole week in Blackpool with Andy and his family, it was much fun! It was my first time staying at Blackpool. 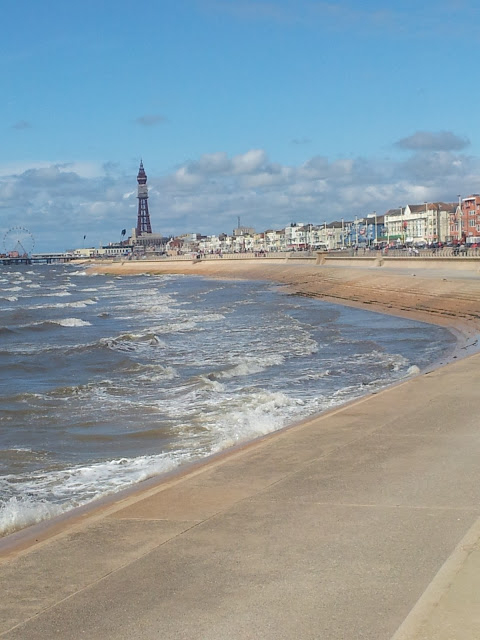 We were very lucky to have sunny weather for the whole time, and I have flip flop tan lines to prove it! The hotel we stayed in was right at the sea front and you can't miss it as it is the blue building that you can see in the photograph above!
The attractions were lots of fun, and we went to quite a few such as Sea Life Centre, Madame Tussauds, Tower Circus, Tower Eye, and a ice skating show called Hot Ice. 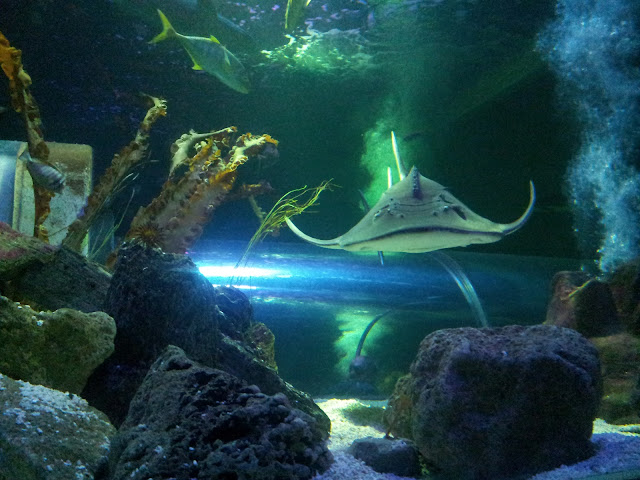 At the Sea Life Centre, I was mesmerised by all the different fish and species that they had. Of course I was fascinated mostly by sharks, and I could have spent hours just watching them swim above my head. My favourite fish was the Bowmouth Guitarfish aka Shark Ray which I got a really good photograph of! Apparently it is more of a ray fish than a shark but it is kept in the same tank as the sharks.

The Circus and the Hot Ice show were sensational, and it was the first time I had ever been to anything like them. The entertainers were very skilled and extremely fit (I was slightly envious). Unfortunately I can't show you anything from these shows as they prohibited the use of cameras and videos, perhaps many of you will have seen them yourself if you have visited Blackpool. 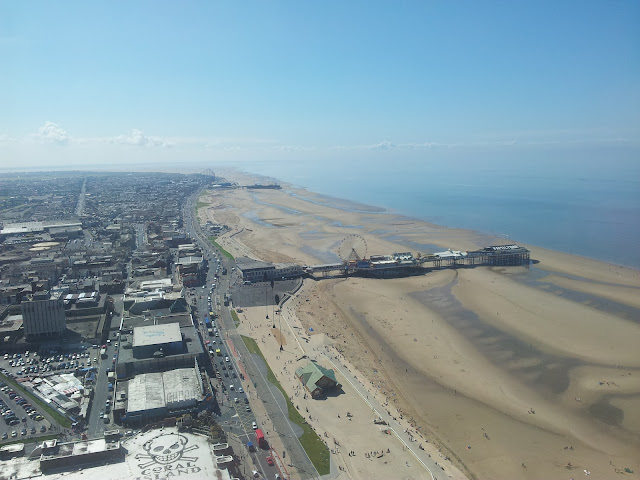 Though I did capture a few photographs from going up to the Tower Eye, it was amazing! I am glad I don't have a fear of heights and that I am able to enjoy this pleasure. It was really cool seeing all the cars and people so small! I found it very relaxing spending time up there just watching things go by, and we had lovely clear blue skies for the occasion. 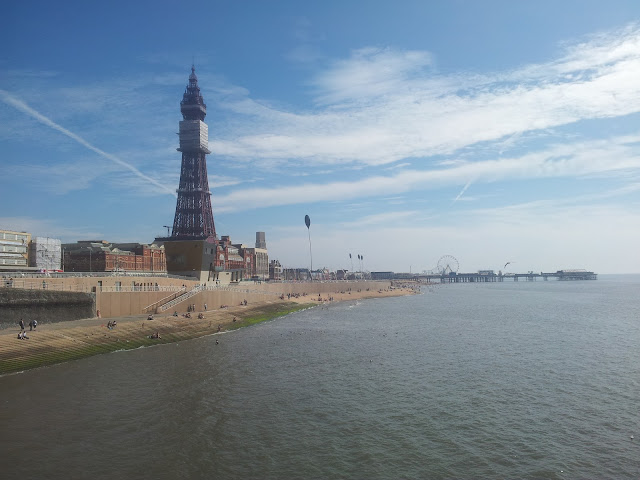 We went lots of walks, and I managed to capture a great photograph of the Tower as I was walking down the North Pier, although the Tower has some scaffolding as it is under maintenance which will take 7 years to complete!! 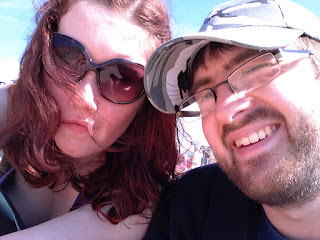 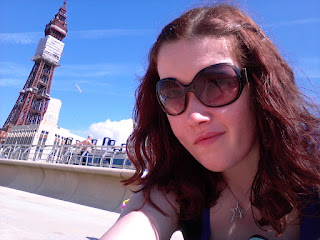 A good holiday was definitely had, with all the attractions, sunshine and walks along the beach!

While I was on holiday I noticed Wink from a creative being, posted on facebook about a CAL using a pattern that can be bought from etsy. The Crochet Overly Mandala looks gorgeous and I have decided I want to do something challenging. As I have become a little bit bored with my Berry Burst and havie completed my Sunny Stripe as well.