Last week I decided that I wanted to make a pair of mittens (never made them before), even though it was very warm here in Scotland. I tried hooking a pattern that was in a book but I decided it didn't agree with me, after trying it several times it just didn't feel right! I went for a browse through both Pinterest and Ravelry, hoping to find a pattern that grabbed my interest. Which led me to find this pattern, as I wanted to make a pair with thumbs! They looked quite simple to do, since they were mostly hooked in half-trebles with a bit of front post trebles for the ribbed effect.

However I wasn't successful first time, after making the mistake to follow the pattern using DK yarn when they ask for sport yarn (which I didn't have). I really wanted to use a particular DK I have by phildar called Impact 3.5, so I altered the pattern to suit the weight of DK so I didn't end up with a massive pair of fingerless gloves. The first glove was a bit of trial and error with a combination of crocheting, trying it on followed with ripping it back out until I got a desired result. The second glove was a lot quicker as I used the first glove as reference, since I never made any notes of the stitches I made! Regardless of this I managed to crochet the second glove with no problems and it appears to be identical to the first one wooo! 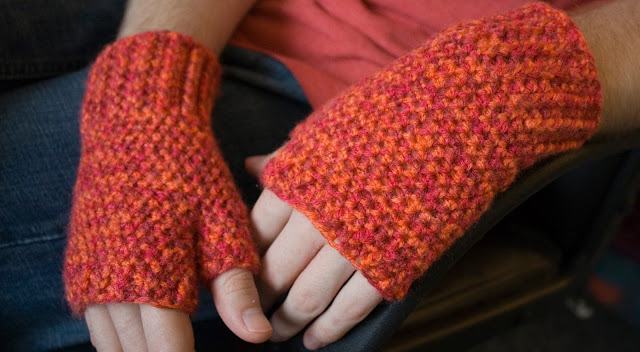 So there you have it, my very first ever crochet fingerless mittens!