Another week with no hexagons, although I think its fair to say that it is because Christmas is only around the corner and I am too busy making scarves! I have lots of different scarves that I have made and can't quite show you just yet. Although I think it may be safe to show you one of them!! 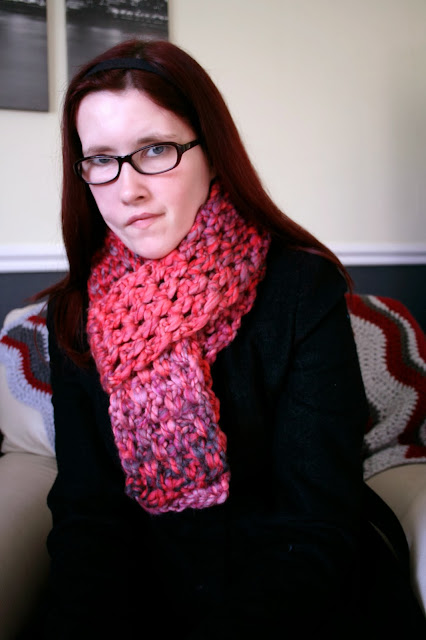 I made this scarf after a work colleague asked if I could make one for his girlfriend but in pink, it is using Sirdar bohemia yarn and a 15mm crochet hook (I kind of like it better than my blue one now he he). I have another scarf on my hook at the moment, and I will be able to show you that next week properly once I have more progress.

Although I can show you a sneak peek! Its a navy yarn with the rainbow gradient going through it. I took this to work one night this week, and it became another commission as another work colleague liked it that much that he asked if he could buy it for his wife when its finished! I can't wait for Christmas to be over so I can show you all my FOs, I have quite a few he he.

For now I am officially saying that my hexagon progress is on hold until Christmas is over, and it will just be Christmas orientated projects from now until then!